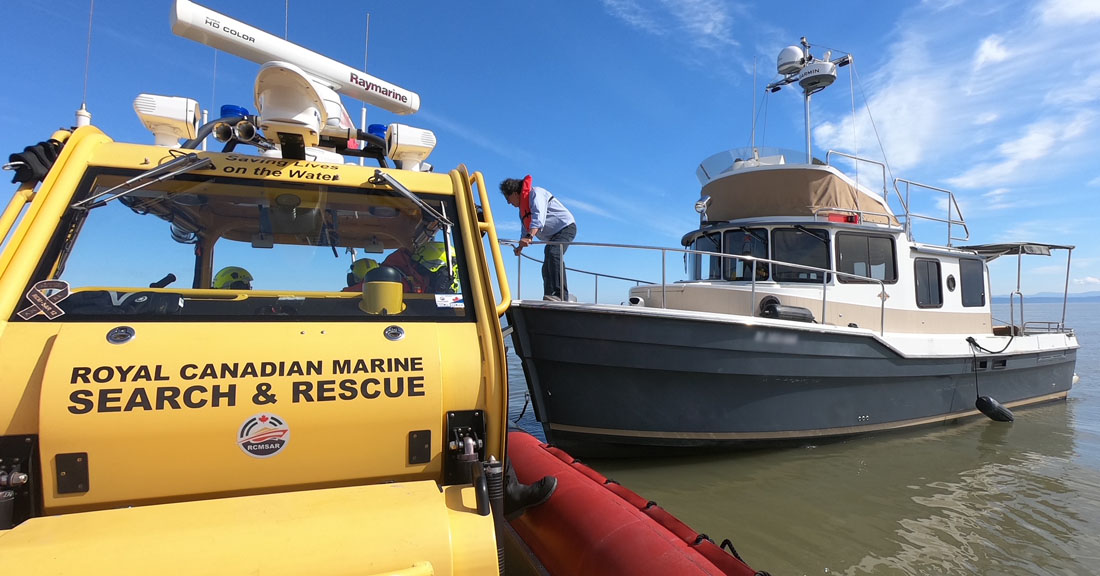 At RCMSAR the lives we save are from all walks of life.

Hear from some of the people we helped on the water and learn about their experience with RCMSAR. 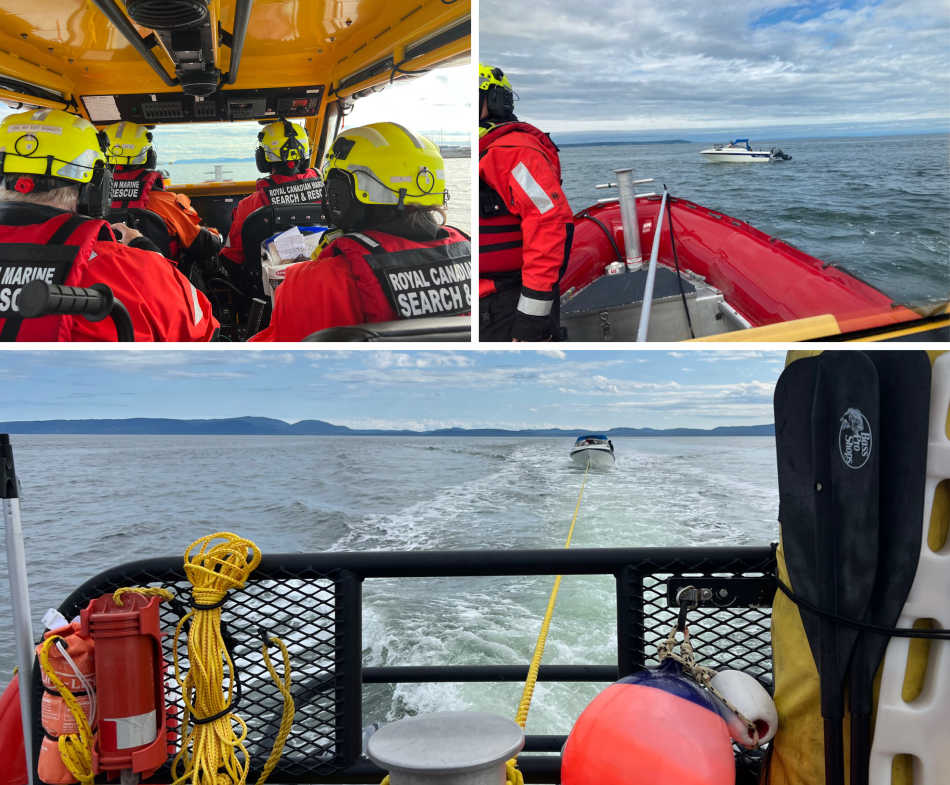 June 19, 2022 - Station 8 Delta was paged out at 1600 hours to help a pleasure craft that had broken down in the shipping traffic lanes off of Pt Roberts.

We located the vessel which had 3 people on board and successfully towed them to the Boat Ramp on the Tsawwassen Ferry Causeway.

The tow was completed successfully and the vessel was released at approx 1800 hours.

All aboard were safe.

We returned to base and our Volunteers returned home for a late Father's day dinner!
. 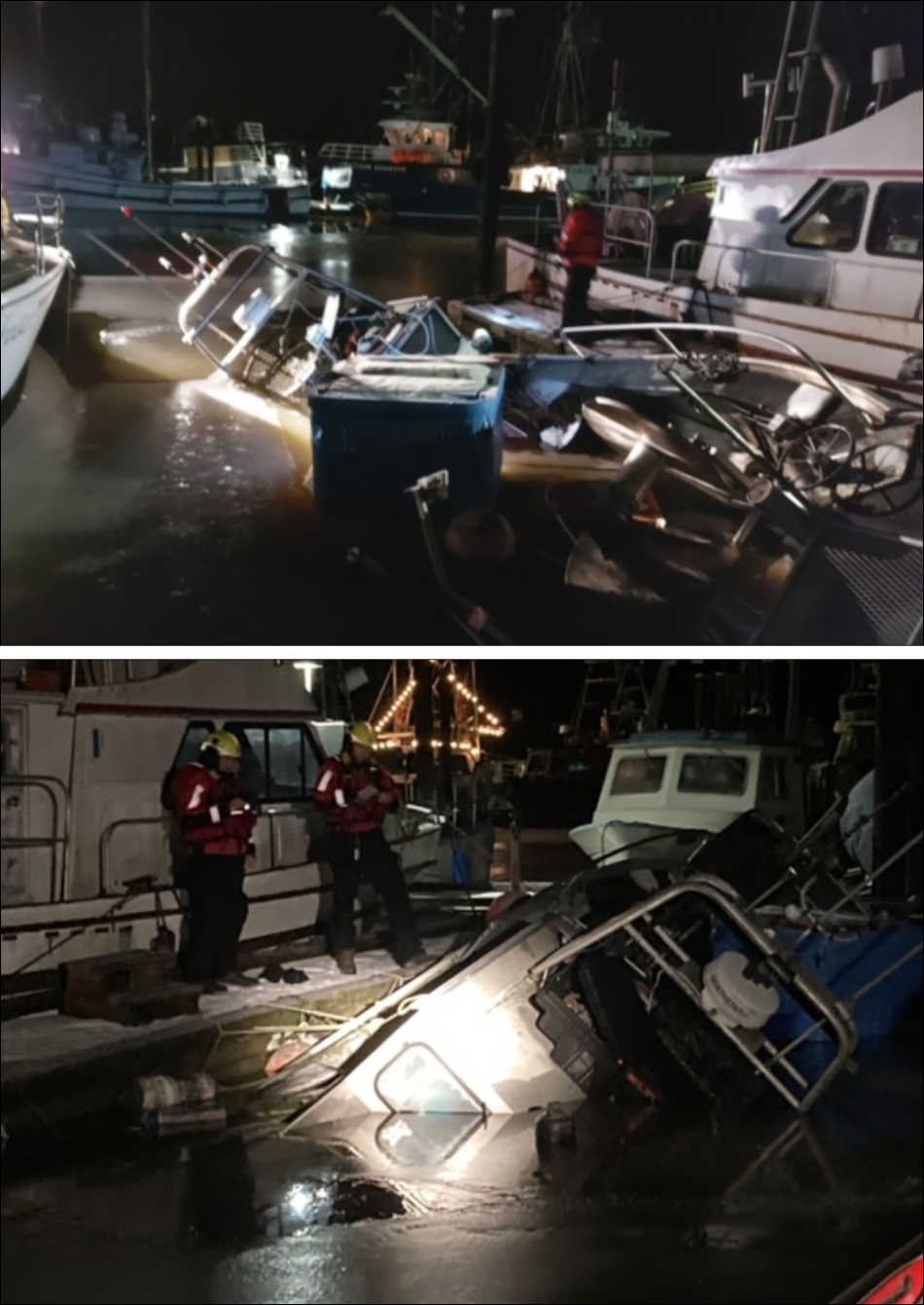 January 10, 2022 - Station 8 Delta was called out at 3am on January 10 to investigate an EPIRB (Emergency Position Indicating Radio Beacon) that JRCC (Joint Rescue Coordination Center) had picked up.

Our crew of 4 members responded and went out to locate the source of the beacon.

They had approximate coordinates to track it but it took about an hour before they located a sunken vessel in the Ladner Harbor Government dock.

It was a 26 foot aluminum fishing vessel that had sunk on its moorings.

Our crew investigated and determined there was no one on board. It did not appear to be leaking fuel or any other hazardous material. The cause of the vessel sinking is unknown at this time. 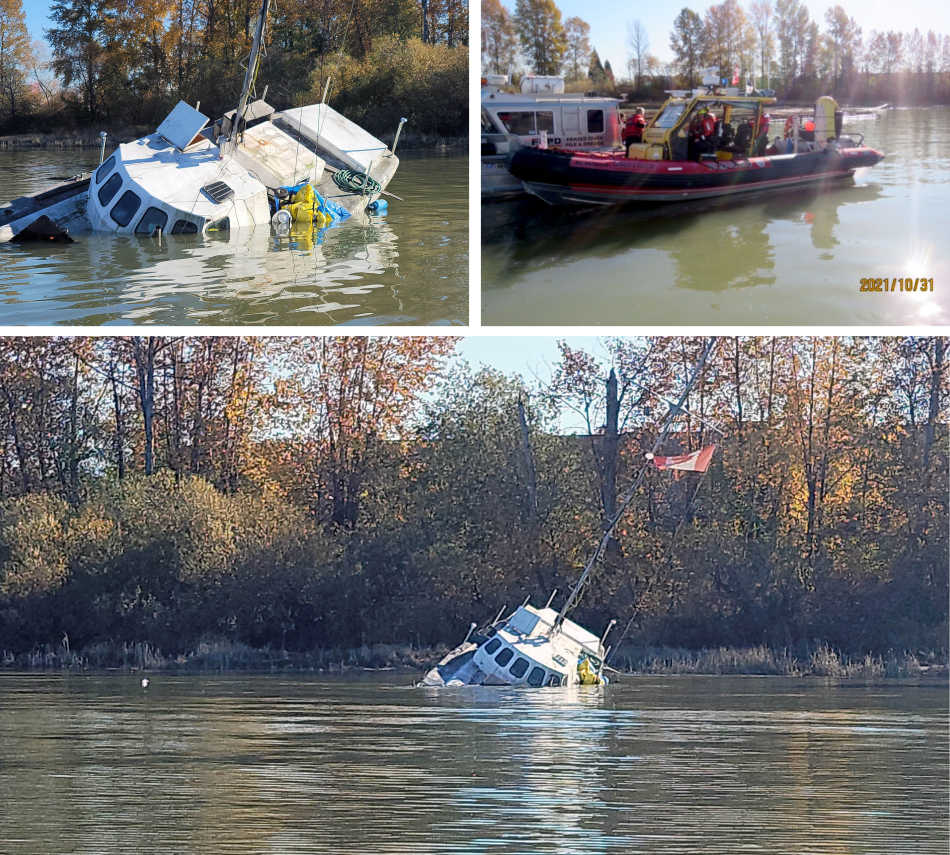 October 31, 2021 -  Station 8 Delta was called out  on Sunday afternoon to a sinking 47 foot sailboat off Shelter Island Marina. When we arrived on Scene the owner of the vessel had been picked up by another vessel. He was cold and wet but ok. We checked on his welfare and then did a search around the vessel for debris and possible contamination in the water. Unfortunately we could not do anything about refloating the vessel due to tide conditions and safety concerns. The owner will need to contact a salvage company to pump out and refloat the vessel. Thanks to the crew of the Salish Surveyor who helped out the owner of the sailboat. Boaters helping other boaters! 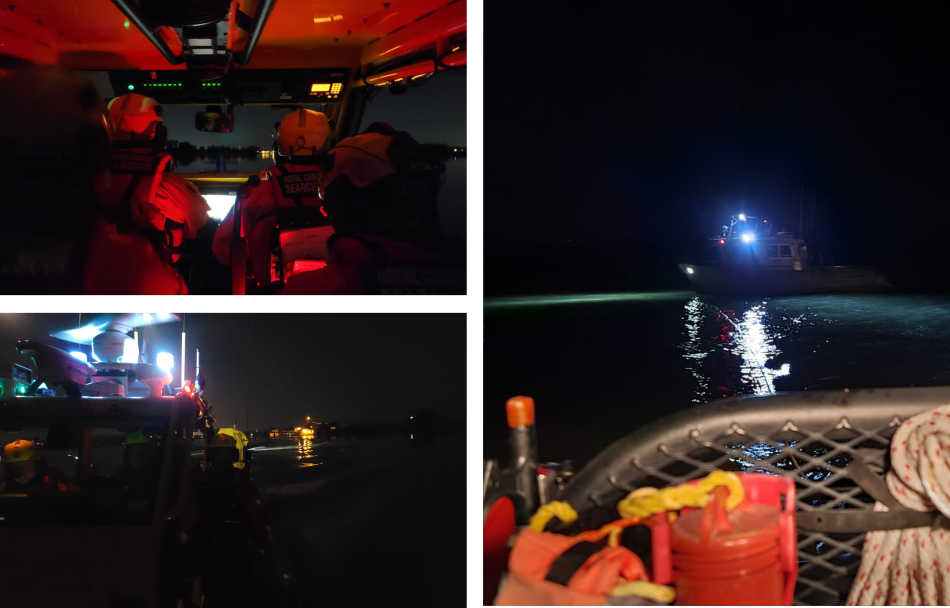 June 27, 2021 - At 01:10 on Sunday June 27th RCMSAR08 Delta was paged for a broken down vessel in between Canoe Pass and Tango 14. It was decided D crew would transition to Tango 14 via Sandheads, to locate the vessel.

After a short search we were able to locate the vessel close to the entrance of Canoe Pass in 3' of water. We immediately set up for a stern tow and made our way back through Canoe pass and under the Westham Island Bridge. Just off Wellington Point the crew transitioned to an alongside tow for better control to get the broken down vessel secured at it's moorings. Our crew was back at the dock in Ladner just after 04:00.

June 9, 2021  - SAR 8 was out for our weekly training on Wednesday June 9 on the Fraser River. While transiting back towards our home base in Ladner, a Mayday call was received at approximately 21:15 that there was a boat on fire near Shady Island in Steveston with one person on board and possibly having to abandon ship. SAR 8 immediately responded to Victoria Coast Guard Radio (VCGR) letting them know we were approximately 10 - 12 mins away from the scene.

We were immediately tasked to the situation. As we arrived on scene a few minutes later, the 39’ fishing vessel was fully engulfed in flames and plenty of smoke. We advised (VCGR) we were on scene and started to immediately search for the PIW (Person in Water). Within less than 5 minutes we were able to locate the individual who was keeping afloat by holding on to a floating boat fender and extremely cold, having now been in cold water for 15 - 20 minutes.

As we approached him, we conducted a quick SAP (Stop, Access, Plan) to ensure a safe and fast retrieval. The person was safely and quickly pulled into our boat. He was conscious and likely into second stage hypothermia. We asked him to confirm if he was the only one on the vessel to ensure we did not have others to search for. He was immediately wrapped with blankets and attended to by our crew.
VCGR was updated and we were asked to meet BC Ambulance Services at the Steveston Dock so the individual could receive a higher level of care. Ambulance services met us at the dock to check the patient and take the individual to the hospital for the required care.
Our volunteers put many training hours in and we train weekly to ensure when we are needed, we are ready, we work as a team safely, quickly and efficiently. This was very evident during this Tasking, as we were able to make a difference to someone who was in a serious and dangerous situation.

See the article in the Delta Optimist here:https://www.delta-optimist.com/local-news/delta-rescue-boat-saves-boater-from-burning-vessel-on-fraser-river-near-steveston-3867026 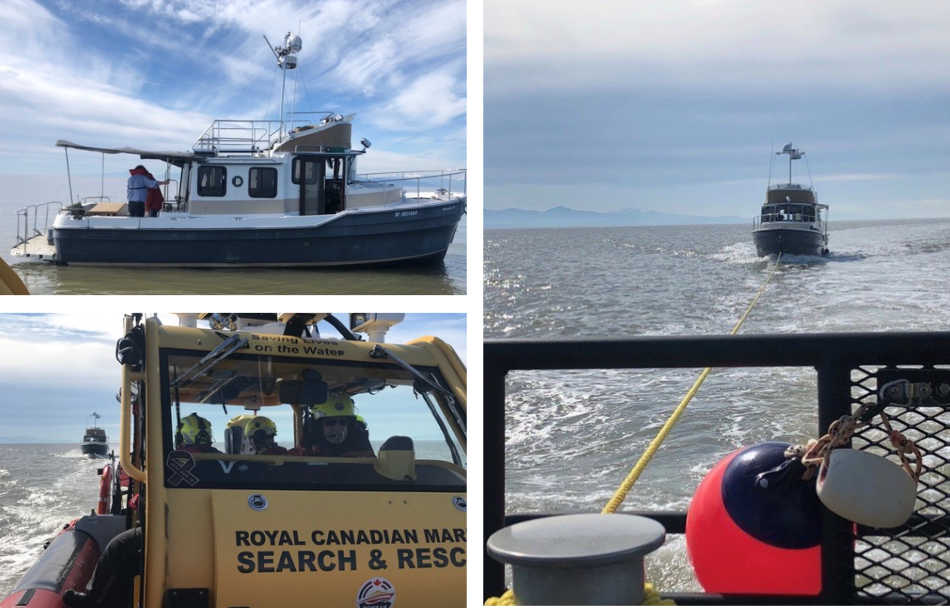 May 22, 2021 - RCMSAR 8 was training in the afternoon and just completed a towing exercise/briefing with the new crew at Sandheads. Report came in over the radio from Victoria Coast Guard Radio (VCGR) of a broken down vessel near Sandheads. RCMSAR 8 answered the call gathering more info from VCGR and were on scene within 5 minutes. Two POBs, people and vessel were fine other than they were in need of tow. We discussed our plan as a crew and communicated our intentions with the Caption of Fish Tank 35' Tug style boat accepted our offer to tow. We were underway at approximately 16:00 taking them to their Westham Island float home. After a long tow Fish Tank and the occupants were safely docked at 18:30. Pictured above.

Dear DELTA MARINE RESCUE SOCIETY, We are pleased to inform you that on May 22, 2021 8:46:27 PM, one of your supporters made a one-time donation of $150.00 to your charity in support of the following fund: General. Donor's message to charity: Crew of SAR8 on May 22, 2021. Thank you for your rapid, efficient, and most professional rescue and tow to Ladner today when my boat Fish Tank was dead in the Georgia Straight. You are great!!! 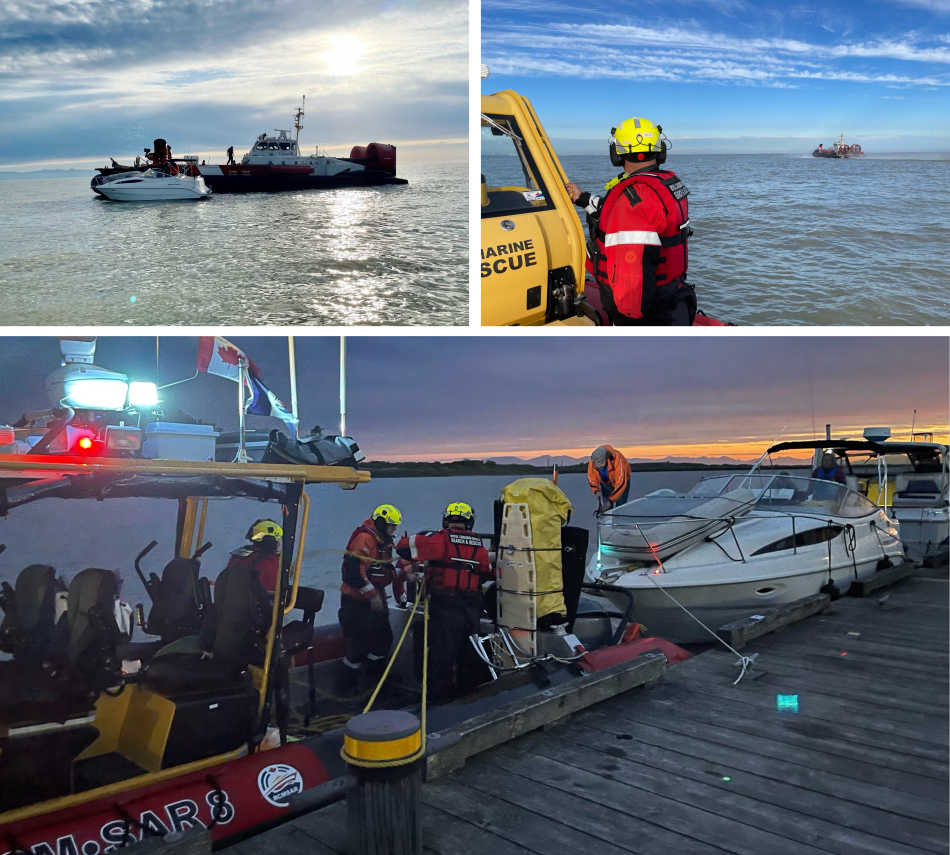 May 22, 2021 - After finishing a tow in the afternoon, we thought dinner time was next….however VCGR radioed RCMSAR 8 and tasked us once again for another pleasure boater with mechanical issues that was located approx 5 miles NW of Sandheads. RCMSAR 8 was asked to meet Moytel (Coast Guard Hovercraft) who was already on scene and they would provide instructions. With our quick response craft we arrived within 20 minutes. Had coms with Moytel who briefed our crew on the situation and asked us to take over and assist with a tow. There were 4 POBs. (3 adults and a 2 year old) and the boat had engine issues along with some water egress, however their pumps were able to keep up. With VCGR approval we set up for tow and were on our way at 19:25 heading to the closest safe Harbour at Steveston. RCMSAR 8 successfully docked the boat at 21:40 and all occupants were very happy to be safe and docked.

We arrived back at our temporary Ladner base at approximately 22:00…just in time for a late dinner and bed!

This was a long day as we started at 13:00 for our weekly boat inspection. With three new crew on board it was a great learning experience for all of us. Great team work and a big thanks for their volunteer time and efforts. It is a great feeling to be able help boaters who are in some sort of distress.

As a non profit society our RCMSAR 8 Fast Response Craft would not be possible without our wonderful volunteers and the donations that we receive from the public. Many thanks!

To the volunteers, Thank you for bringing back our neighbors safely a little while ago. I’m sure it wasn’t easy pulling their boat that had broken down. Your expertise going through Westham Island bridge and docking the boat when the current is running hard, showed. Truly you are needed in our local waters.
Kind regards, Mrs. Knox

We cannot do our job without you.
Thank you for supporting us &
helping us save lives.